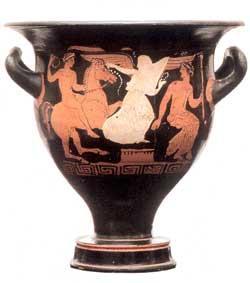 Odessos (Οδησσος, Odessos, Odessus) is one of the most ancient settlements in Bulgaria. It has been found during the last quarter of 6th c. BC (about 585–550 BC) by Greek émigré from the Asia Minor city of Miletus, on site of an earlier settlement by Thracians, whose name the Greeks preserved. During the entire history of the city, the relationships between the two nations here, as well as with other tribes, located inside the territory, were excellent. The city’s administrative structure was like in most other Greek polises – democratic. The ruling authorities were the City Council (boulet) and the Local Assembly (demos). During its first two centuries of existence, to about middle 4th c. BC, Odessos was not a big city, but was an important harbor on the Black sea western coast. Its citizen traded with numerous cities and islands of Greece and Asia Minor, from where they imported luxurious objects: painted ceramics, gold, marble, as well amphorae with wine and olive oil, and many similar edible or general use objects. Part of the imported items stayed in the city, while another part was exchanged or traded with Thracians from the internal parts of the city’s region. Thracians sold to Odessos grain and meat, wood and other raw materials serving for city’s export.
About the middle of 4th c BC Odessos was fortified with solid build walls, resisting the siege of Phillip II Macedonian of 339 BC. However, his son Alexander III the Great (336–323 BC) conquered the city in 335 BC.

Odessos flourished most memorably during the Hellenistic Age (end of 3rd – 1st c. BC), when the city served as temporary center for the armies of the Thracian heir of Alexander the Great – king Lesmachus (323–280 BC). This is period when city’s necropolises contain numerous valuable golden jewelry, expensive wooden sarcophaguses, adorned with terracotta figures, bronze and glass utensils and other luxurious artifacts. From the second half of the 4th c. BC, Odessos started to operate its own mint house according the Greek monetary system – bronze, silver and even certain emissions of gold coins. Local coins were illustrated with the head of city’s chief deities – Appollo and the so-called Great God. Other deities were served as well – Dionysus, Samothracian deities, Demetra and other.

Big public buildings are constructed during the period – theater, many temples, gymnasium (young boys school) and other. Due to the increase of Thracian population in the city, in 2nd – 1st c. BC was erected a temple of the Thracian god-rider, whose local name (category) is Heros Carabazmos, and a temple of Artemis Phosphoros.

In 15 AD Odessos was annexed to the Roman Empire as part of the province Moesia (later Moesia Inferior) and serves as its main port. However the city preserved its relative independence in government, such as the right to mint its own bronze coins (to the middle of 3rd c. AD) and not to have a Roman garrison inside. The city population increased. Many new immigrants from Eastern provinces populated the city. New city walls were built including larger areas. Many beautiful public and private buildings were constructed, The theater was reconstructed and richly adorned. Enormous bath complex was built on 7 000 sq.m. – the fourth in space in Europe. The city had a shipyard, traded with Syria, Palestine, Asia Minor coastal cities, Greece, Italy and other parts of the Roman Empire.

The city imported marble, gold and precious stones for its jewelry workshops, glass and bronze utensils, luxurious ceramics, wine and other unavailable locally items. Local craftsmen produced ceramic, glass and bronze utensils, lamps, gold and silver jewelry, architectural ornaments. Arts were very popular – theater, music and poetry. Bronze and marble statues were erected. New cults appeared – to the Emperor in Rome, to the health related deities Asclepius and Hyggia, to the eastern god Mithras. Very popular were sports and gladiator fights. Each five years took place preserved from Hellenistic Age traditional big sport and cultural events – games with different subjects and competitions. Initially (end of 1st c. BC) the games were called Hermayos – under the name of god Hermes, while later the name changed to Darsaleyas, under the name of local Thracian deity Darsalas, who mingled with the city’s Great god in Roman era. In 242 AD Odessos was visited by the Roman emperor Gordian ІІІ (238–244), in honor of whom the city sponsored such games and minted special emissions of bronze coins.

By middle 3rd c. (249–251) Danube was crossed southward several times and the Balkan Peninsula invaded by Goths and their allies. They plundered the Roman provinces of Moesia Superior and Inferior, as well as Thrace, destroyed many cities, including the big city near Odessos – Marcianopolis, founded by emperor Trajan. Odessos remained untouched of the invasions, but the destruction of settlements and local economy led to significant decline in city’s fortunes. The city began to rise again in 4th c., related to the move of the capital from Rome to nearby Byzantium and the making of rebuilt Marcianopolis as capital of the province Moesia Second. The population grew again and new immigrants came from Asia Minor, Syria and other regions of the empire. New, bigger and higher city walls were constructed. Smaller baths were built on the site of destroyer old ones. Christianity expanded gradually its influence, though amid the Thracian and rural population the old cults prevailed well until 5th c. During that period the city turned into one of the most important commercial centers of early Byzantine Empire.

It was the seat of a bishop. Within the city walls and its vicinity are built many early Christian basilica adorned with multi-color mosaics and wall paintings. Trade and crafts flourished. Odessos was production center for wide variety of ceramics, glass and bronze utensils, golden jewelry, marble ornaments for early Christian basilicas.
By the end of 6th and early 7th c. Avar and Slav intrusions depopulated and ruined the lands between Haemus (Balkan mountains) and Danube river. Gradually these territories were left to barbarians from the Byzantine officials. Odessos still remained the most solid ground for ancient civilization and traditions and it felle latest in barbarian hands. In 614 AD its inhabitants left it, the city overrun and ruined by barbarians and left without population for a number of centuries. In the neighbouring territory appear many Slav, and later proto-Bulgarian settlements.